Gilbert Perreault was without a doubt one of the best players in Buffalo Sabres history and TSN ranks him as the 5th most talented player in NHL history.
For those interested, here is the total list
1. Mario Lemieux
2. Bobby Orr
3. Wayne Gretzky
4. Alexei Kovalev
5. Gilbert Perreault
6. Kent Nilson
7. Denis Savard
8. Pavel Bure
9. Jaromir Jagr
10. Pavel Datsyuk
So sending an autograph request to Mr. Perreault was a must for me. However when researching his address in some TTM forums I came across the fact that he charges for his autographs and all requests must come with $5. I wasn't surprised to some degree due to the number of people selling TTM's on eBay and I guess Gilbert just wants a piece of the action. I decided that it was worth $5 and the time to write a nice letter so I did just that. Three weeks later I receive the card below and a letter. 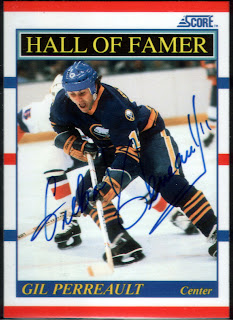 For starters, the autograph is beautiful. Totally worth paying $5 bucks for in my opinion and his choice of thin blue sharpie compliments his signing style.
The letter was a bit of a disappoint because as I opened it, it began "Dear Customer". Not the response I was expecting from the type of letter I had sent. 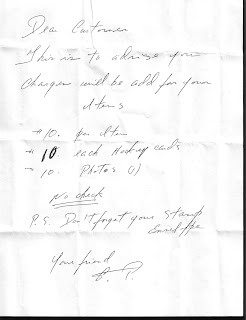 It turns out the rates for his autographs have increased from $5 to $10 and this letter was notifying me if I wished any more autos I had better come up with the money.
What are your thoughts on paying for TTMs and the letter I received?
If you are interested in writing him, you could chance it by sending a fiver, but it looks like 10 will get the job done.
Posted by Pro Set Cards at 12:23 PM