Drop the Gloves! Trade Part 2 - This time it is personal

So part two I knew Casey was going to throw in some extras, I just had no idea what they were going to be. It turns out he really knows me as a collector and threw in some cards that are all important and significant to me in some way! 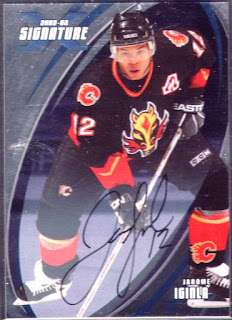 I went after an Iggy auto TTM style and even though it turns out that he doesn't sign cards, I did get an auto. However, Casey fixed that for me sending me a very nice Iggy on-card auto! 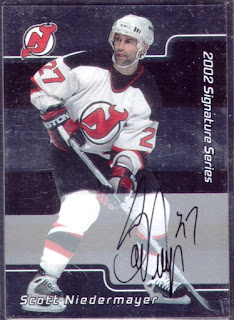 Even though I already have two of Scott's autos, this is only my second on a hockey card the first being this one. However, this is a much nicer auto than my other, so this is a very welcomed upgrade and a very nice card! 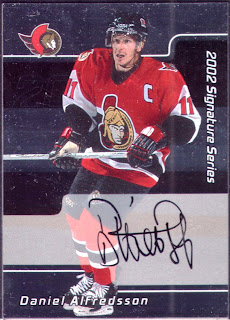 Like the first two autos this is a nice 02-03 ITG BAP auto card. However, unlike the first two, I didn't have his auto at all! Instead of upgrading my autos, Casey was kind enough to give me one I didn't have at all, but definitely wanted! I have seen Alfy play live more times than any other NHL'er and his career which has spanned three decades may be finally over thanks to this lockout, but if he does return, he will continue adding to a very solid which may not result in a HOF induction, but will result in his number being retired in Ottawa when he is done with the game.

So there you have it, 6 autos, 8 cards in total and a very nice and well appreciated trade has come to an end! Thanks again Casey, I already have some cards on my end I think you might like and I look forward to our next deal as always.
Posted by Pro Set Cards at 6:06 PM