How often do you walk into a card shop and you see checklists in toploaders? If they are current/modern cards, that might be true of the young guns checklists as they tend to draw some interest from collectors, but in MY OWN experience this doesn't happen often.

To be honest, most checklists especially from the 80's and 90's aren't terribly valuable and they are often a part of a complete set but don't get lots of love. I am like the 50th blogger to probably talk about checklists since Sal had his online poll which determined that they are pretty much appreciated. In the  last year or so, I have come to the realization that they do make good art and are actually cool and fun! Some are also indeed valuable too!

I have one of these and it is unmarked and in amazing condition. I have had it for an eternity and main reason for owning it is.....Wayne's name is on the card! It is the closest thing I have to a Gretzky rookie right now and I think it is pretty cool. I watch many auctions on eBay and I recently saw an unchecked one in VG condition sell for over 20 bucks with shipping!!

Case two, ANY Checklist prior to the mid 70's

If you own a checklist that is from the mid-70's to earlier and it is unchecked, you are sitting on cardboard GOLD! Many kids growning up used them for what they were intended for and that is checking what they have and don't have. So the actual amount of mint, unmolested cardboard checklists is much lower than any other card in the set due to the nature of the card. Some checklists like the ones from 71-72 or 66-67 can book for several hundred dollars.

So there are some value to some checklists, but what I find cool about the vintage checklists are the designs of some of them and how cool they look. Here is one of my personal faves and even though I don't own it yet, I can still appreciate it. 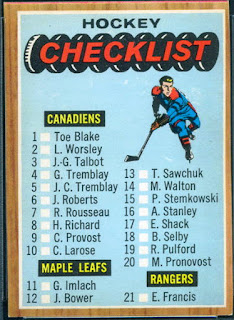 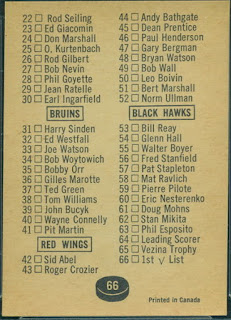 Look at that beauty from both sides. Without a doubt, one of the most unique and cool looking checklists ever made! No room on the front for full names because of the design, Terry Sawchuk gets the T.Sawchuk treatment.

Meanwhile the backsize has plenty of room for Bobby Orr to have his full name and even the checklist is mentioned in a cool fashion. Just love the use of pucks on the front and back!

Now on to checklists I do own...

As most of you know, I have been working on the 76-77 OPC set and I am getting very close to the end. However, a few cards in the set aren't in great shape and that includes the three checklists. The checklists are in nice enough shape, they just happen to be marked either partially or completely. I was hoping to get some solid excellent shape checklists that were unchecked and I did even better than I hoped. My LCS had three, near-mint or better unchecked checklists for sale. I asked the boys to try and do better than the price listed on them which was full BV (and fair really) but they were more than willing to do a buy 2 get one free on those. 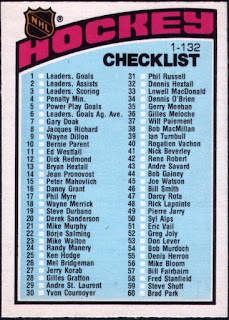 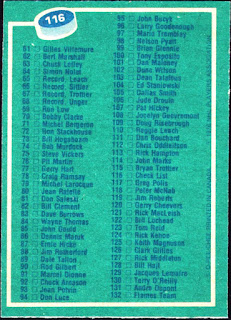 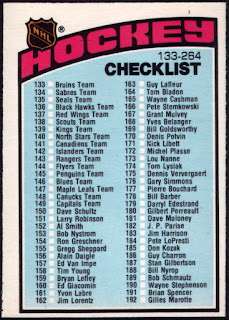 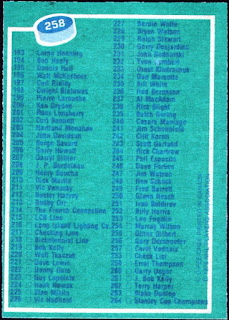 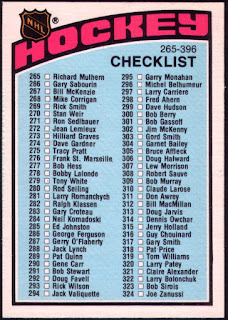 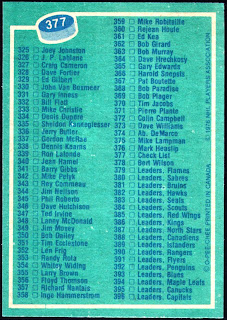 Centering on all are great, chipping is very minimal and the corners are all very very sharp. They are pretty much in line with many of the nicer quality cards in my set so I am very happy to have an upgrade in that department. With that being said, I have three old, marked checklists with your name on them Robert so if you need some for your set chance, you can have them free of charge my friend!