Why my collection is missing are cards pretty much from the 60's to mid 70's. I have some in that range, a few big names like Dryden, Lafleur and Barber but not much else. I am always trying to find cool card and important cards I don't have, but budgets are budgets and it is a marathon not a sprint!

Here is one that I have been wanting for a while. The topps version of this card had popped up as trade bait once and when I couldn't pull the trigger on the trade I went hunting. Many graded versions of this card exist and are often well above the BV and ungraded ones tended to go for much more reasonable prices (of course). Well I think this one was a steal. Though it isn't in mint condition by any stretch, it is clean and crease free with a little loving on the corners and aging of the white. 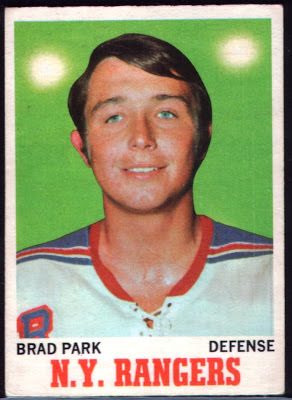 The front shows a bright-eyed kid with a future. I think I might have combed my hair like that when I was 10 years old.....but I will never provide photo evidence. 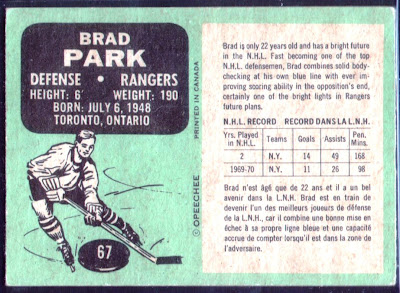 Back side is pretty cool, lots of info in a small space and a neat cartoon player with vitals in large print cover the left part.

Brad Park was a first ballot HOF'er and a 5-time NHL first team all-star. He was often compared to Bobby Orr which I am sure was a blessing and a curse in itself. Brad was named top defenseman and game 8 MVP in the '72 Summit series and even though he never won a Cup, his victory in '72 is every bit as important to many hockey fans.

In his career, Brad scored 213 goals and had 896 points in a solid 1113 game career. Even in his final season, he managed to get 43 points in 67 games for a pretty weak Red Wings team. Brad was even ranked by The Hockey News as the 13th greatest NHL defenseman of all-time and a player of that calibre is ALWAYS welcome in my collection! Now I just need his autograph.