Like I said in my last post, I am really just trying to convert my Gallagher auto into cards I would appreciate more. For a few years now I have been trying to secure a nice mid-range Tavares rookie. My packs and boxes of 09-10 UD Series one have yielded nothing so I decided to try my hand at landing a Young Gun. Tavares Young Guns started out around the $100 mark and have steadily dropped despite him picking up his game. You can typically land a Young Gun Tavares in the 30-40 dollar range for ungraded Nrmt-Mt ones. I felt that was a little rich for my blood so then I tried landed a Trilogy Tavares rookie. I like these cards a little better because the print run is actually about a 1/10 of the Young Guns. Young Guns are a tremendous value and are more sought after but typically you can expect a print run of at least 5000 per card. The Trilogy Tavares rookie was limited to just 499. After a couple failed Best Offers, one of the BIN's I had been watching ended and reappeared as an auction. I was all over that and wasn't going to let it go for peanuts. Sure enough, I was the lucky winner and an easy fiver under my max bid. So here is the mid-range Tavares rookie specimen in my collection. 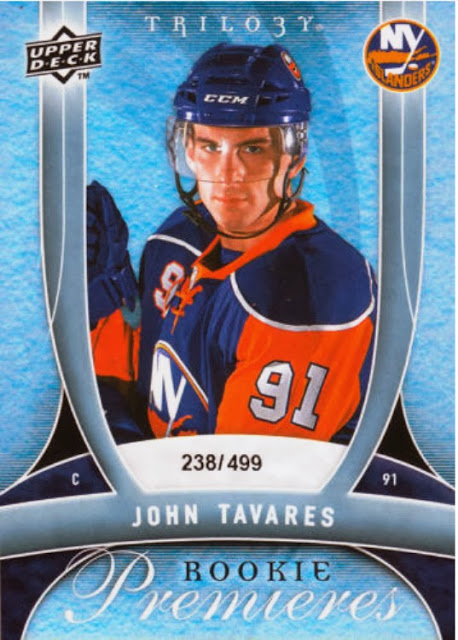 So this card is amazing in person. The card is printed on a very nice and vibrant foil board and you certainly get a nice rainbow effect when you look at the card. Numbered as I mentioned before and the card is in perfect shape. Book value on this is 10 bucks lower than the Young Gun rookie (60 for YG 50 for Trilogy) and in my opinion worth every bit of the book value and much more than the $15 I stole it for. When Trilogy came out in 09-10 you could easily expect to pay 25-30 a pack for this stuff with there being hits in every pack. Rookies fell 1 in 3 packs and autos and memorabilia hits in the other 2 in 3 packs. Prices have dropped on this product and you can find hobby boxes (9 packs) for less than $180 bucks now. Still pricey, but there are some pretty cool hits if you are among the lucky.

If you are looking for a mid-range Tavares, both the Trilogy and Black Diamond versions can be had at deals if you are patient!
Posted by Pro Set Cards at 12:00 PM