If you  have a PC of a modern player, what is their most desirable rookie card? Many collectors wouldn't hesitate with their answer and it likely would be their "The Cup" rookie. As far as book value goes, these rookie usually carry a pretty hefty price tag and are sought after by fans of the set and of the players.

Since I consider my Brett Connolly and Adam Henrique PC's to be reasonably serious I felt it would be important to try and cross The Cup of their lists. My Brett Connolly The Cup rookie isn't my favourite but I do like it a fair bit. When compared to my Dominion Gold card, the swatches aren't even close in comparison. The Cup version does have a nice subtle two colour swatch and isn't much smaller than the Dominion one. But the print run is nearly 10 times larger and this card actually cost me 5 dollars more than the Dominion Gold card. Those factors do take away from the card a little bit but still in the end it is a great card for my PC and I do like it lots, it just isn't my personal favourite. 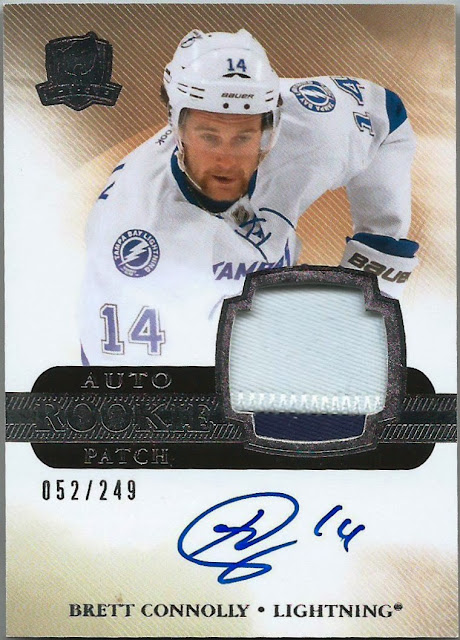 As you can see, this is numbered 52/249 and features a cool two colour swatch (blue and white). The auto is nicer on this card because he includes his Tampa number 14 with a signature that looks a little less rushed than the Dominion one. In fact, you can see some elements of his old autograph from junior which I will get into when I finish all my Brett pick ups. Here is the back side of the card which I do like the improvements that UD has made of the years to their The Cup back designs. This has a few important stats and your lengthy authentication note that you have come to expect from UD.

The book value on this card is 80 bucks which is tied with his Crown Royale rookie as being the most "valuable" base rookies you can get of Brett Connolly. I don't include his Titanium rookie because it is limited to just 14 copies and doesn't have a book value. In fact, I haven't come across any online in the last year or so but I suspect I could have easily missed it.

So there you have it, my third favourite Brett Connolly rookie which trails only my Rookie Anthology Patch Rookie /15 and my Dominion Gold Rookie /25
Posted by Pro Set Cards at 3:47 PM