Without a doubt, Ken Dryden is one of the greatest goaltenders in the history of the game. The Hockey News has him ranked as the 7th greatest goaltender of all-time. In 397 career regular season games he won 258 and he only had 57 losses. In fact, he tied 17 more games than he lost. In 8 seasons, he won 7 Stanley cups! If anything, Ken Dryden knows winning! 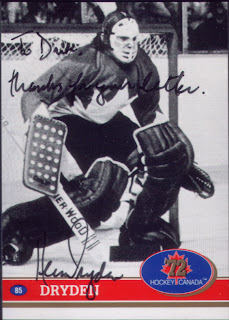 I mailed this card out in December and received it back about about 2 months later.
I don't have many Ken Dryden cards in my collection. The only two different ones I have are the card you see (Future Trends '72 Summit Series Set) and I once pulled a 78-79 OPC Ken Dryden All-Star card from a pack which had a stick of gum cemented on the back! I love the photo on this card which is why I chose it.
Posted by Pro Set Cards at 10:00 AM