Well the last 4 days have been really exciting in my household with 3 TTM successes. This one is my favourite of the three. I sent Kelly Kisio two cards about 3 weeks ago and when I received them back he included a small note. The note said " Dave: Thank you very much for your kind words." and then he signed the note.
This is the first time I have received a note back, and for those of you reading, I am pretty new to the TTM world and I was absolutely shocked. What shocked me was it seems like he really enjoyed my letter. I always felt like the players who read these letters and do use the favour of signing the cards. But, I get a small sense that some (many?) of the players actually enjoy reading what their fans have to say. I guess I never took the time to think about that aspect of things, but I think it gives me more desire to continue this hobby with my current approach.
In many respects I do treasure the note more than I do the other autographs, and I hope that I have the chance to receive more in the future:
Here are the two cards I sent away 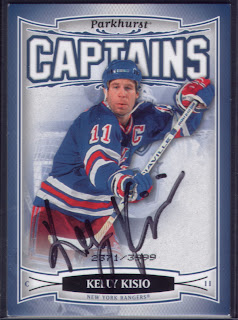 I chose this one because it talks about Kelly's strong leadership on the back and I have always liked Parkhurst cards. 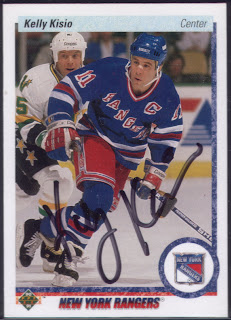 I picked this card because it was the first Kisio card I got as a kid and consider 90-91 UD to be one of my top 10 favourite card designs of all-time.
Kelly Kisio was one of those players who seem to fly under the radar of most fans but, if you had paid attention to him he was a jack-of-all-trades. Best season was in 87-88 (my first season watching hockey) where he put up 23 goals and 78 points in 77 games. He would finish with 8- 20 goal seasons and 658 career points.
Currently Kelly is the GM of the Calgary Hitmen and I believe this is the role he was born to play. They have been a phenomenal franchise and one of the main reasons has been Kelly. Currently the Hitmen are rebuilding and I have no doubt that they will return to form in no time.
Posted by Pro Set Cards at 11:19 AM