On to round two!

Well, it took 7 and a half games, but the Devils finally won a series and will be into round 2 for the first time in a while (2007). Henrique was the hero, but Marty really was the reason for us making it to round 2.

He put in a vintage performance last night seeing more than 40 shots and stopping all but two. Both goals were tough ones and he certainly can't be faulted.

As for the Flyers, I am concerned. We are hurting and there is no denying it. Kovy is going to be pounded because rumours are out that he is hurting and the Flyers aren't the kind of team that will go lightly on them. Fact is, we need our third and fourth lines to continue doing what they do and we could just have a chance! 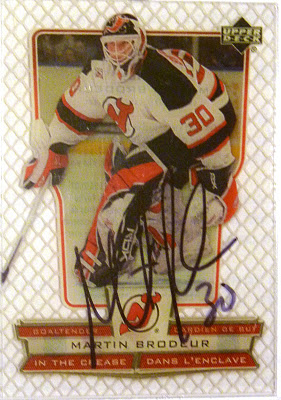 One neat fact after the first round is Marty has more points than Jason Arnott, Jamie Langenbrunner, Peter Sykora, and Duncan Keith to name a few. Marty has the same number of points as Mike Green and Jeff Carter.
Posted by Pro Set Cards at 11:08 AM