Last year, I busted a box of 10/11 H&P and I was very happy with the results. I had 5 hits and all of the cards were pretty decent. It is now one year later and the Gaunce auto could be a card that REALLY makes that box cool. After that box, I had every intention of buying one this year and when I landed one for 30 bucks below LCS prices I was elated.
Here are the results of the break!
Base cards 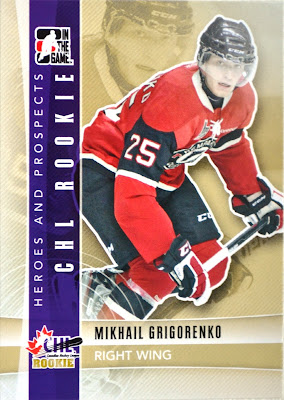 The look of the cards are nice! I think the design and layout certainly rivals anything UD and Panini put out in that price bracket and the fact that the cards get no Rookie respect is something that irks me but I imagine I am a part of the minority. Here is an example of the front, each card has a nice gloss to them which you can't see on the scan.Back side 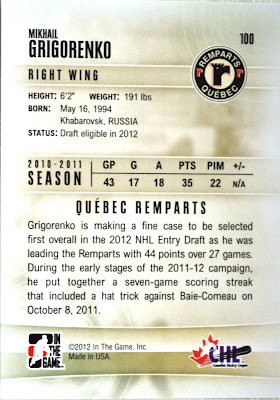 The backs are simple enough with a good balance of stats, vitals and information.
Subsets 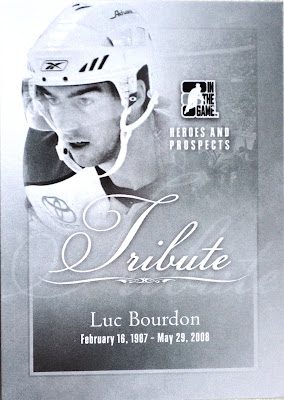 Like last season, the set features a few subsets and the increased set size from 150-200 allows ITG to include many more stars as part of the Grad subset and a few specialty cards like this Bourdon card. 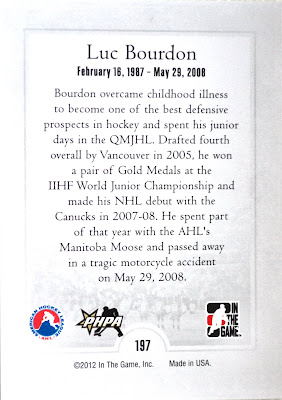 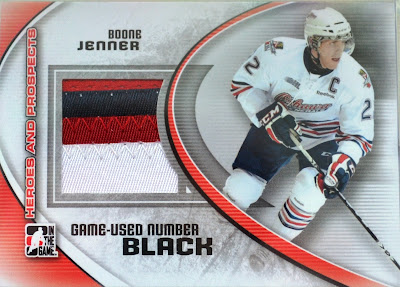 Boone makes his second appearance in my ITG busting history. Last year I pulled his Subway Series game used card and this year I topped it with the nicest H&P card I ever pulled. This swatch is beautiful and the size allows for all three colours and a small piece of jersey to peak through the window.
Devan Dubyk Moving Up Silver Version /50 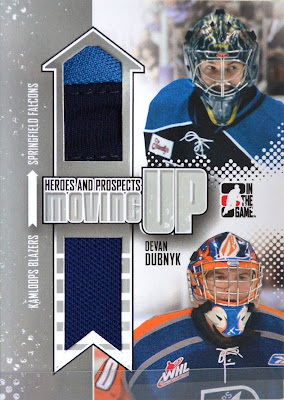 A really cool swatch! It is a two colour seam and it is BUSTING out of the card. Another example of what ITG gives collectors, best bang for their buck!
Subway Series Trio /70 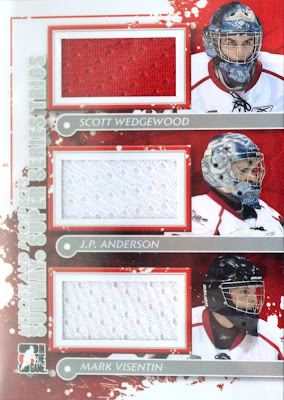 This didn't scan as well as I hoped, but this card represents my bonus hit. I ended up with three game-used cards which is nice, but the fact a Devils prospect is on the card is just that much cooler! Swatches aren't the best, but Wedgewood's is white which is nice as my other Wedgewood swatch is red.
Auto Hits
Blake Kessel 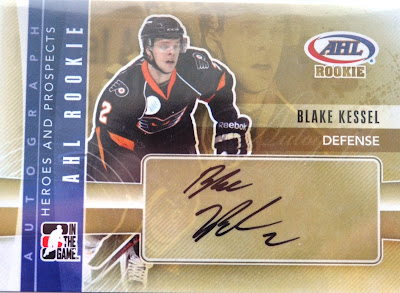 Phil has a brother? Turns out he does and his career thus far has been pretty strong, but taking it to the NHL level will be a challenge and time will tell if he will experience the same success Phil has.
Sven Bartschi 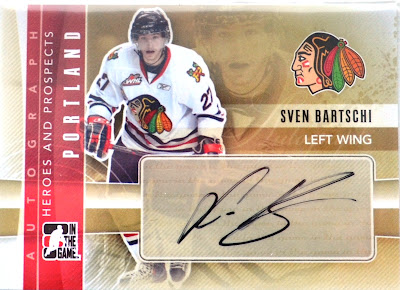 Sven is going to be a superstar and getting this card was another hit that turned a normal box into a great box. Sven's name is spelled a variety of different ways which might be why his auto is just an S. B. This Calgary draft pick already has 5 NHL games under his belt with 3 goals to his resume. I think he will be a full-timer next season and a reason why Iginla might be playing somewhere else in the near future.
I also pulled two inserts, one was a Cory Locke Calder Champions card and the other was a Zack Fitzgerald Tough Customers card.
This box was a blast and the set looks nice. I am about 60 cards short of a complete set, and I think I might try and pick up another box or two in the summer. I am also going to try and collect the 200 He Shoots points so if ANYONE out there wants to sell them or trade them please contact me and I will try and make it worth your while.
Most of my hits are also up for trade with the exception of Sven!
If you find yourself with an extra 100 bucks, grab a box, you won't be disappointed.
Posted by Pro Set Cards at 7:38 PM