A little love to the Canucks Fans and some other Vintage

After that Messier post, I thought I would send some love the Canucks way with a post about one of their favourite players. I was in my LCS and I was skimming through the 4 for a dollar bin and I saw a card I had never seen before. In fact, I had to double check on the back because I really wasn't sure if it was true. A Harold Snepsts Rookie! What surprised me at first was the lack of a moustache! I figured this card had to be old because that man's 'stache is so bushy you figure he was born with it.

But sure enough on the back there was only one year of hockey listed and I figured it had to be his rookie. For 25 cents it was worth the risk plus the card looked in pretty good shape. Corners are a tiny bit worn but that was it.

After bringing it home, I was given confirmation that it was his rookie and it books for 20 bucks! However, I also discovered a small surface crease by his head/shoulder in the bright light at home too. I was a little sad at the crease, but the card looks really cool and I got it for 2 bits! 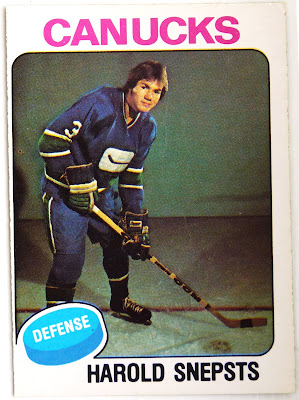 These next two cards I bought recently in an auction on eBay. They were a lot deal which I won for less than 4 bucks. 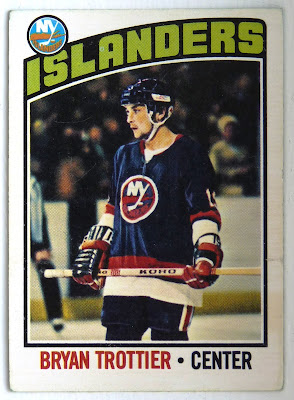 The first card in the lot is a 76/77 OPC Bryan Trottier rookie. It does have some fuzzy corners and a mark on the right side of the card by his stick. There are no creases or other damage so I was really happy to get this card for what I paid. This was another card on my wish list and in this condition I probably see no reason to upgrade. I might actually try and get the rest of the set since I have to most expensive card already. 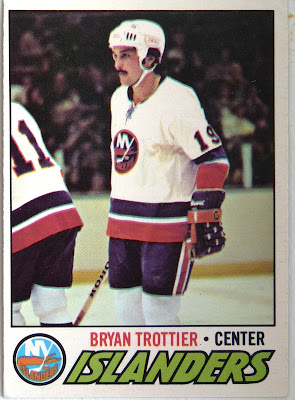 The other card in the lot purchase was Bryan Trottier's 77/78 OPC card. This card is in better shape than the rookie with a slight off-centre cut and a small mark on the upper right corner. Other than that it is a great looking card too. Like Harold, I have a hard time imagining Bryan without a moustache and clearly that is because he grew one in his second season.

Before Stastny and Selanne beat the NHL rookie point records, the most points by an NHL rookie was held by Bryan Trottier. He had an amazing 95 points in his rookie year which was 23 more than the previous record held by Gilbert Perreault. Trottier would break 100 points 6 times in his career and finish with 1425 points in his career. He would also win 6 Stanley Cups and a Canada Cup and his 1425 career points are currently good enough for 15th in NHL history. Not too bad shabby if you ask me!