Well my favourite player from my childhood has decided that he is done playing professional hockey as has retired as a Pittsburgh Penguin. The retirement ceremony can be see here.
Bill Guerin had an excellent career, the former 5th overall pick of the Devils in 1989 scored 40+ goals twice and had a career high 85 points in 2000-01. His final totals were 429 goals and 856 points in 1263 games and 13 times finished with 20+ goals. In addition to those stats, he also won two Stanley Cups.
The one games I will always remember of Billy was game 4 of the 95 Finals when he scored 3 points to secure the first cup in Devils franchise history.
Bill was an excellent power forward who skated well and had a shot that rivaled some of the best in his prime. As I mentioned in a previous post, Bill was my first and only TTM. As you can see below, he used blue sharpie on his 92-93 Parkhurst RC. The other auto was signed with a black sharpie and was one I has bought a few years later from a sports store in the mall back in 98. I believe I paid 5 bucks and in my opinion it was money well spent. Both autos have his name and number 12. He would switch to #13 after he was traded for Jason Arnott and would keep that number for the rest of his career. 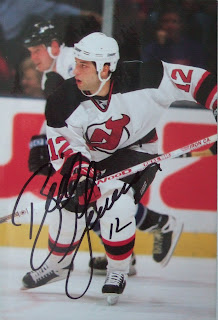 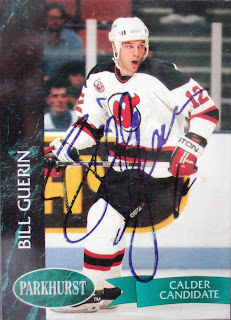 In addition, I also bought a game used lot off ebay a year or so ago and managed to get three g-u cards for 0.99 plus shipping. The blue swatch was from his brief time with the Blues and the other two are different greens both from his days with the Stars. 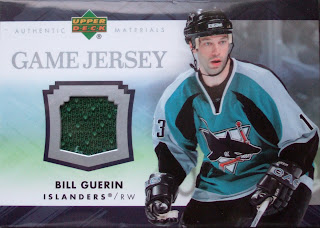 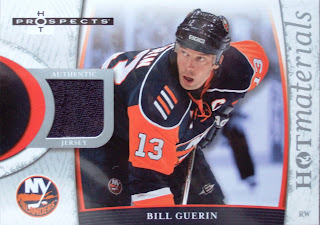 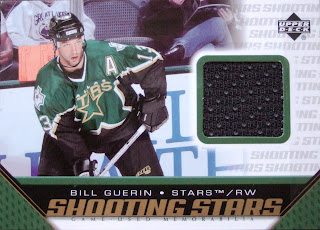 The Shooting Stars swatch is the nicest of the three in my opinion partly because the play on words and it is the largest of the three swatches.
I am sad to see that he has decided to call it a career, but he did leave relatively on top of his game. His final season he still managed to score 21 goals with the Penguins and though they didn't win the Cup that year and he likely will never make the Hall of Fame, he still left the game with two rings and many other accomplishments such as Olympic Silver Medalist, and World Cup of Hockey Champion.
Posted by Pro Set Cards at 9:16 AM