The early 90's was an ever growing world when it came to sports cards and the same could be said for the NHL draft. It slowly grew from a back room activity to an arena event with spectators. 1991 was also the year that everyone was going after Lindros including the card companies. Score owned his exclusive rights but that didn't stop Upper Deck and Pro Set from finding loop holes. Upper Deck put out "Canada's Captains" in their 1990/91 UD High Series and Pro Set came out with CC1.

Pro Set on the heels of their debut, came out with an insert set and autographs inserted into packs. The insert set was not advertised and you could end up with a few of these cards in a box or none. Eventually after the dust settled, the CC (collectable card?) consisted of 9 cards. 4 could be found in series 1 and 5 in series 2. The first four were The Draft, The Mask, Pat Falloon and Scott Niedermayer. The second batch, CC5-9 consisted of leaders from the 90-91 season.

I actually remember the 1991 draft because the Devils owned Toronto's pick thanks to the Tom Kurvers deal and I was hoping all season they would finish last and the Devils would land Lindros. It never happened of course and Quebec would never get Lindros either despite having the first overall pick. But what Quebec did get was far more than Lindros' value and the Devils did well themselves. Here is the card: 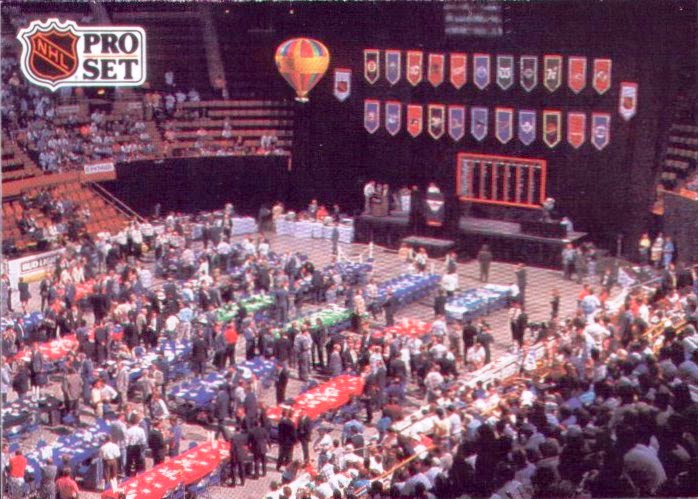 Look at the hustle and bustle. A far cry from the 1971 NHL draft which was held in a posh Montreal Hotel. This draft would be a pretty impressive one if you considered just the first round alone. 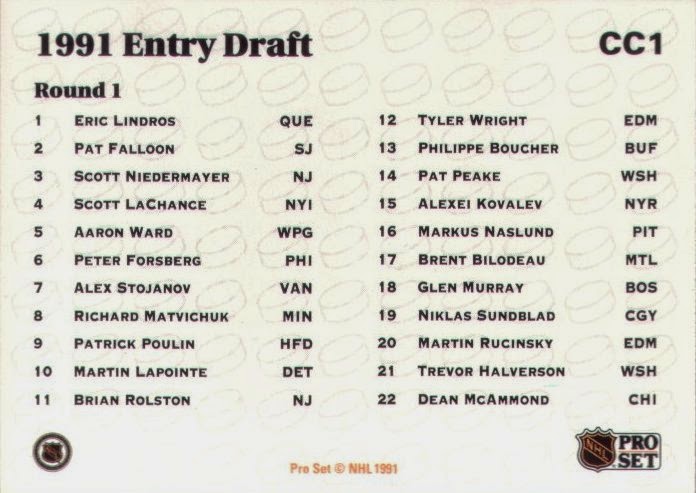 Here is the back and the whole reason for the card was player number 1. Some of the other names aren't too shabby either. Niedermayer, Forsberg, Matvichuk and Rolston. Kovalev wasn't a slouch and neither was Markus Naslund. Everyone one except Brent Bilodeau would play in the NHL. Half of these players would score at least 300 career points and some of the best picks ended up later in the draft. Ray Whitney went 23rd overall and Ziggy Palffy would go 26th.

Looking back on the draft, I am glad we had the third pick as things turned out very well for the Devils.
Posted by Pro Set Cards at 3:52 PM