I have been pretty busy this year with family, work and other stuff and I find making time for posts has been pretty hard. But as my son and wife are both down for a nap, I find myself with a few spare moments so here are a few pickups from a while back. The first three are a lot of 11/12 Artifacts autos that I landed in a lot purchase for a buck a piece.
Karl Alzner 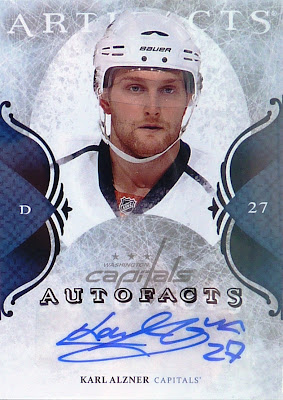 I am a huge fan of this guy. He was awesome both times he played for Canada at the WJHC and he will be a very steady and solid NHL defenseman. I believe that Alzner could have Rod Langway potential....
Clarke MacArthur 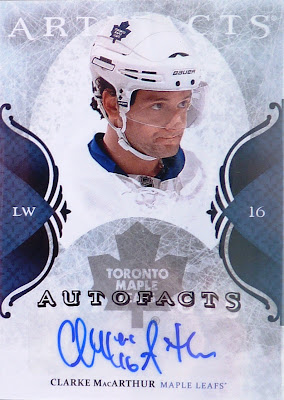 Clarke was the second card in the lot and even though I am not a huge fan of him, I do like his auto and he put up some respectable numbers last year. This year has been a challenge for him and I am not sure if he will ever get back to 60 point form, but I believe he has 20 goal and 40 point potential when he is healthy.
Stefan Della Rovere 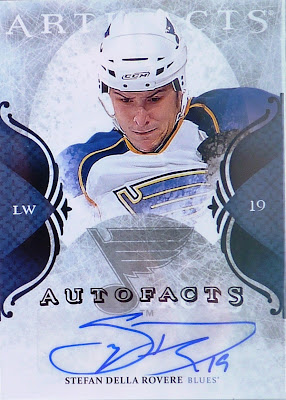 Another World Junior kid I fell in love with. He plays a great grinding and agitation game. The problem is, there aren't may roster spots for players like that and he has found himself deep in the depth charts of St. Louis. I really want to see this kid get a real NHL shot, but time will tell if that happens. This is actually my second Della Rovere auto, I have his rookie from the Zenith set #/99 as well.
Eric Tangradi 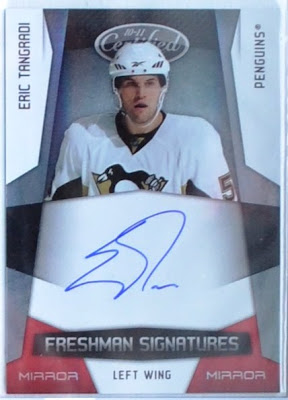 Sometimes when you read another person's blogs you sometimes pick up an appreciate for a player you normally wouldn't follow. Tim (aka The Real DFG) is a pretty big Bill Guerin fan like myself and when I read a while back that he was starting a PC of Eric Tangradi I decided to do a little digging. Turns out Tangradi is another power forward not unlike Bill Guerin and he plays a good physical game. So after reading that I decided to watch some auctions and sure enough I landed yet ANOTHER Certified Rookie Auto. This is the Mirror Red version of his rookie and in addition to having a nice on the card auto it is numbered to 250 and it found its way into my collection for under 4 bucks.
So there you have it! A few simple gems, and I hope to share a few more soon!
Posted by Pro Set Cards at 1:20 PM