In addition to the vintage, I was able to buy 20 autos and some of them where auto rookies which is a nice bonus in my books. I don't know why, but something about an autographed rookie card that makes them extra special. So here they are:
Chris Philips 97-98 Pinnacle BAP Auto 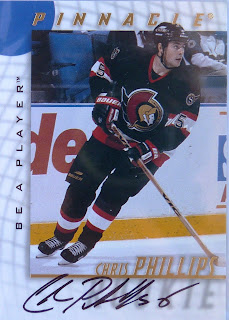 Former 1st overall deserves to be the first one listed. I think he is hoping to finish his career with the Sens who are currently rebuilding. 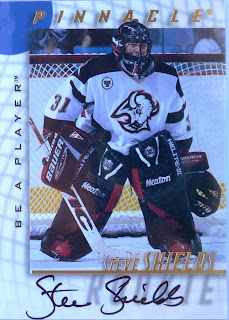 Don't know why this scanned so blue, but the auto is sweet. The look on his face, isn't so.
Cory Stillman 97-98 Pinnacle BAP Auto 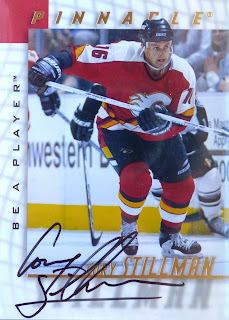 Another one still kicking around the league. Always dependable and a pretty decent auto too.
Marco Sturm 97-98 Pinnacle BAP Auto Rookie 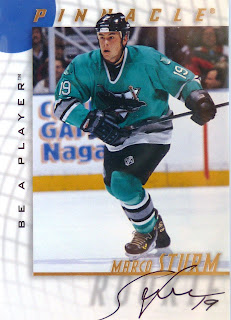 Did you know Marco has had 7 - 20+ goal seasons in his career? Another nice auto. 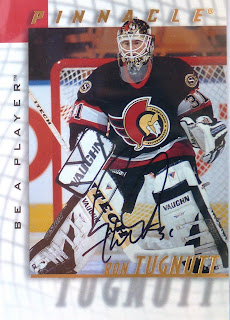 Who doesn't love this guy? Before there was Dwayne Roloson stopping rubber galore, there was Ron Tugnutt. I will never forget his game in 2000 against the Flyers when he stopped 70/72 shots only to lose 2-1.
Keith Tkachuk 97-98 Pinnacle BAP Auto 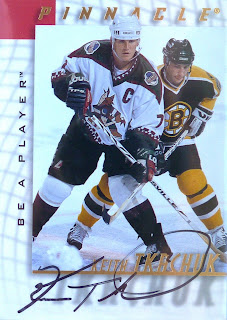 I was STOKED to see this one in the $2 box. This two time 50 goal scorer has always been on of my favourite players from the 90's.
Nick Kyperos 97-98 Pinnacle BAP Auto 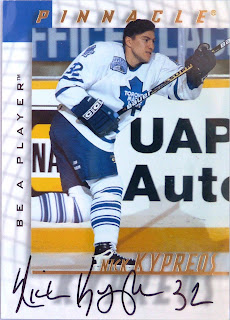 Kypper isn't a bad TV analyst and was a pretty good enforcer in his day too. Love the photo on this one.
David Legwand 99-00 BAP Millenium Signature Series 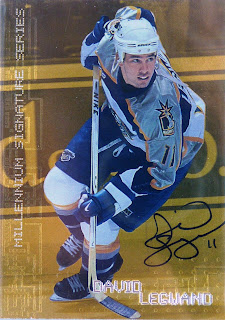 Second overall pick from '97 has never really matched expectations but he still has worked himself into a pretty decent career.
Peter Mueller 05-06 Heroes and Prospects Series 2 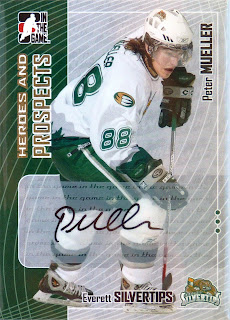 This card is a neat one as it is his first major release card and it is autographed. Books for 25 bucks and is the most "valuable" of my auto finds. I like it a lot, but it isn't my fav. 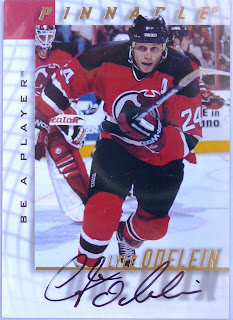 Lyle was tough as nails and a great enforcer. Another auto I was really happy to pick up.
Jacob DeSerres 09-10 BTP Goalie graphs 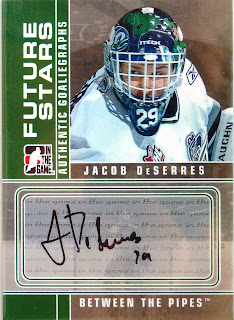 Bought this because I don't own any BTP cards. This kid was one great junior goalie who just couldn't get signed by the Flyers. He is now going to play CIS hockey this fall for the Calgary Dinos. Here is hoping he can get back in the an NHL organization. 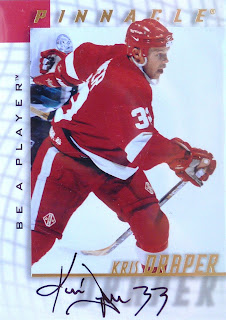 This kid is a WINNER. I still remember him captaining Canada at the WJHC. A great NHL player who can do just about anything. Spent his entire career with the Red Wings. 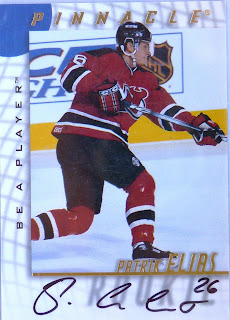 I couldn't believe this one was in the box too! I have his auto, I have his rookie, but not both on the same card. This was one of my favourite autos for sure. 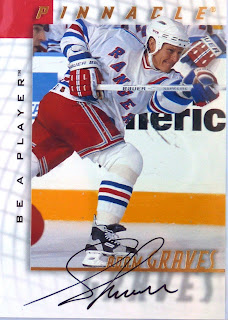 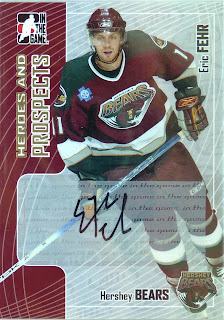 Neat auto, couldn't leave this one behind. I am not in love with the card, but it lists for 20 bucks. 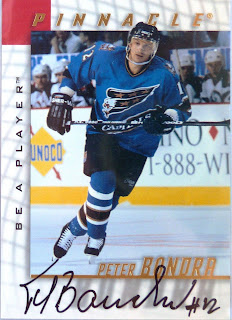 503 career goals, averaging 0.465 goals per game! Bondra was amazing in his day and I think he was every bit as good as Pavel Bure without the flash....Just my opinion.
Curtis McElhinney 09-10 BTP goalie graphs 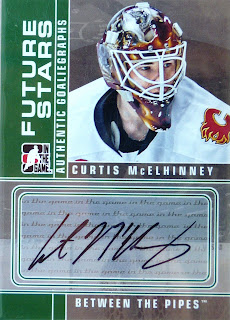 Another one I couldn't leave behind even if I end up trading this one. 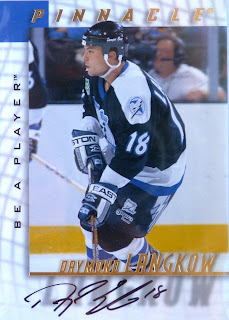 Just did a post on this guy and here is his auto. A must have if I say so. 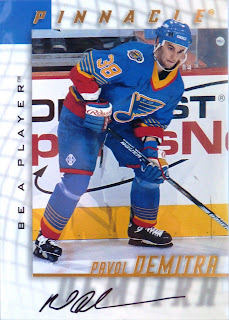 Wow. I don't need to say why I got this one. 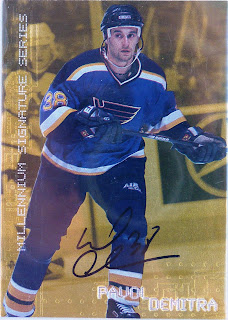 Ditto. I do like he numbered this one. The auto looks nicer too.
There you have it. These are the autos I got with my purchase at the swap meet. I still have my 4 game-used and 4 rookies to come.
Posted by Pro Set Cards at 9:23 PM