Card of the Week - Daymond Langkow

Hard to believe after such a cool start to a "Franchise" that Young Gun cards were once religated to mail-in status in Upper Deck's cheapest product. The object of many collector's desire spent a couple years in the "minors" before they were called back up to Upper Deck's base set where collectors have lusted for them ever since.

This past week in the news, the Flames traded Langkow back to the Coyotes in exchance for Lee Stempniak. On paper, it appears to be a bit of a salary dump but really this trade could be great for both teams. Stempniak is 28 and has many years ahead of him, but don't expect the point a game production he did after the Leafs to Coyotes trade. Lee is a half point a game player at best and likely will be a 3rd liner in Calgary.

Langkow, only played 4 games due to a neck injury last season is looking at making a comeback. I remember when he was first drafted and there certainly was a great deal of pressure for him to perform. Didn't work out with Tampa, but Daymond did hit his stride with Phoenix and Calgary breaking the 20 goal barrier in 7 straight seasons before sliding in 09-10. I expect to see him in more of a mentor/leadership role this coming season, but he might be good for 20 goals given the extra ice time in Phoenix. 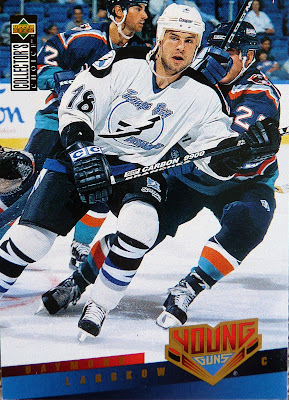 A simple card with a nice gloss to it. The Young Guns emblem is unique and the Islanders jerseys in the background have me craving fish sticks. Overall just a good clean mid 90's hockey card. 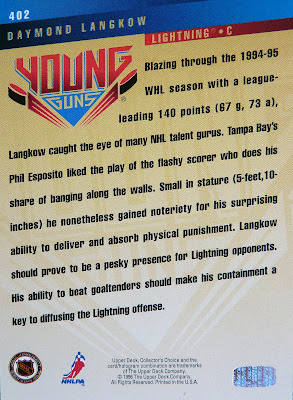 All write-up. You can see a little stats are hidden in the text and the information is pretty relevant and what some fans and collectors want to see. I like the amount of text on the back and only would like to have seen some vitals to call this complete. The old puck style hologram is present in the bottom right.

How do you get this card in 1996? Well you needed to pull this card:
Young Guns Redemption Card 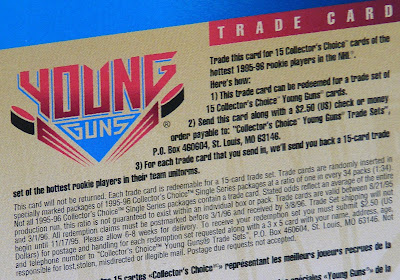 Here is what was required....not a bad deal I thought at the time. I ended up with a couple of these and mailed away for a few sets. I had a couple left over redemptions that I kept for collecting purposes. The highlights of the 15 cards were Doan, Koivu and Alfredsson YG cards. Not all were rookie cards as players like Koivu were a part of the World Junior subsets from the early 90's.