Paul from Card Boarded asked about the odds of pulling a Jimmy Howard rookie from a tin of 05-06 The Cup. I am interested in a similar case, which would be pulling a Zach Parise from a tin. Either case has the exact same odds which I will get in to in a moment.
The 05-06 The Cup set featured 91 rookies and 100 base cards. The base cards where numbered to /249, the patch auto rookies which were cards 101-177 where numbered to /199. There were three shorter printed patch rookies which were numbered to /99 and finally there were 11 other auto rookies numbered to /249.
In all, there were 18359 rookie cards printed in the set. In the case of Jimmy Howard, he made up 199 of the 18359. When doing the probability of the getting a Jimmy Howard in an 850 dollar tin, you need to know how many rookies you are going to get in your tin. Each tin was supposed to have 5 cards in them. Some would be base cards and the rest are rookies, parallels or inserts. Based on what I have seen online, you can expect on average between 1.5 and 2 rookies per tin. Some will only have one, while others seemed to have 2 or 3. I will use 1.5 as an approximation.
Based on an average of 1.5 rookies per tin the probability of getting a Howard or Parise rookie is:
1.626%
Not the greatest odds, but much better than the 0.81% chance of getting a Crosby RC.
05-06 The Cup Howard rookie. Probably better to just buy it rather than hope to pull it. 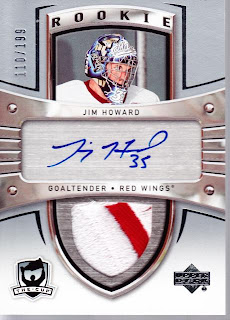 05-06 Parise RC. Much like the Howard, can be had for cheaper than the box. 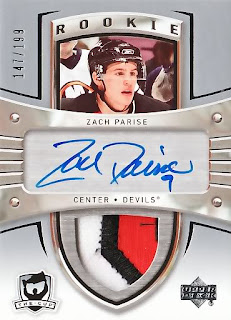 The Cup is always a great product, but has been far beyond my price range. I would rather use the money to buy a couple different boxes than take a chance with a 5 card tin of The Cup. With that being said, I still like to try and snag The Cup singles when I come across a good deal but the risk on buying a tin isn't worth the gamble for me. Have any of you bought a tin before? How did it turn out?
Posted by Pro Set Cards at 11:15 AM